This walking tour is perfect for those who do not want to change hotels every day. for a unique experience in the unspoiled region of Umbria with its beauty and hospitality. It offers the right combination of art, nature and hospitality. In the Umbrian landscape, you will find rolling hills covered with woodland, vineyards and silver- green olive groves alternated with colourful fertile valleys and small picturesque towns built on hilltops. 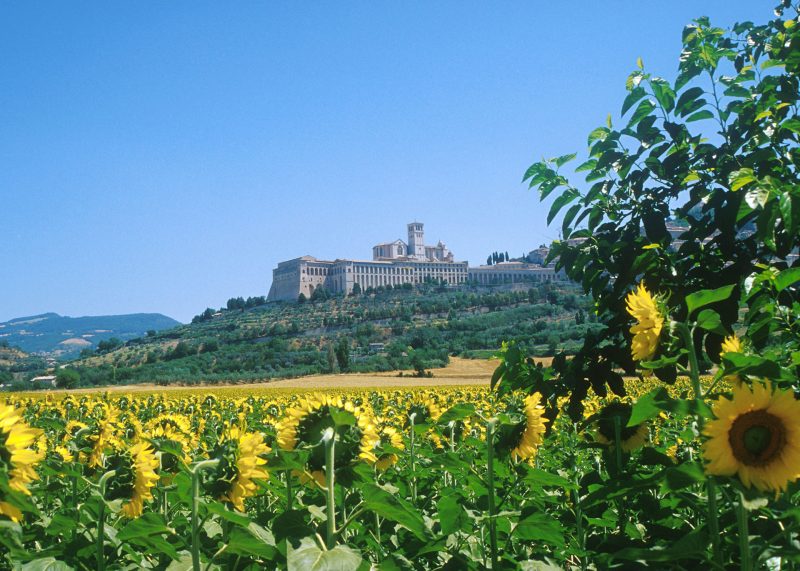 This tour starts in the Middle Age city of Assisi, the pilgrims’ town built against the slopes of the green Mount Subasio. Many monuments have been erected in honour of the beloved saints Francis and Clare. In Assisi you will make a town walk passing the most important monuments and you make a walk through the hills around Assisi. On the fourth day you leave the town and walk to Spello. Arrived in medieval town of Spello you can first visit the old town centre and then take the train to Spoleto. Your hotel is situated in the historical centre. In Spoleto, there is a lot to visit, including the big cathedral, a Roman house, many museums and of course the famous aqueduct bridge Ponte delle Torri. It is also a town with excellent restaurants, where local delicacies are served. In Spoleto you make a walk in the holy woods of Monteluco and along the Way of Saint Francis once called the Olive Grove Path (Via degli Olivi) 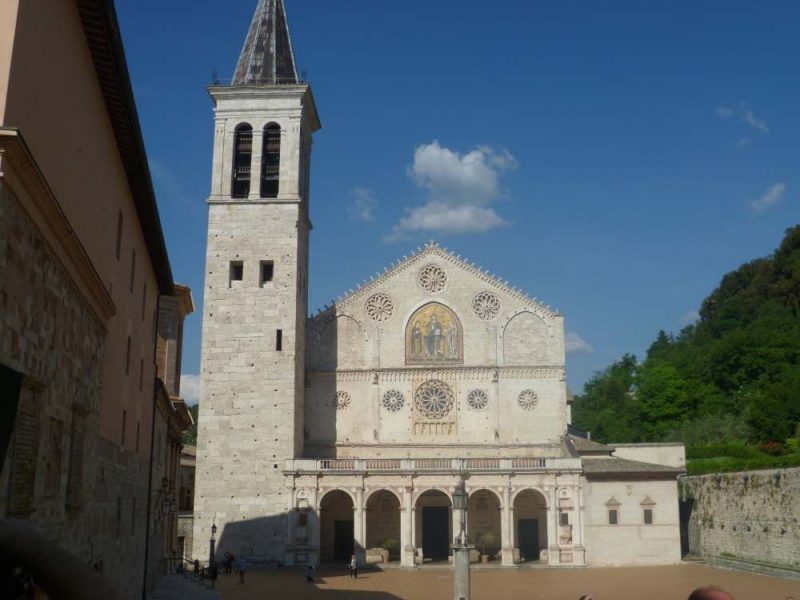 The tour can of course be extended with extra nights in Assisi or Spoleto. Also you could stay for two extra nights in Spello and make a nice loop walk in the surroundings. Please ask us for more information.

For walkers with experience. Routes through hilly landscapes with up- and downhill walking. Daily distances between 11 and 20 km. An average of 3 km an hour. You will walk on footpaths, mountain tracks, forest trails and on quiet country roads. Some days you can choose between longer or shorter less strenuous walks. Total km to walk:

Self-guided: daily all year round

Day 1 | Arrival at your hotel in Assisi

Individual arrival at your hotel **, *** or **** hotel in Assisi. On your first evening, you have a briefing and will have the opportunity to discuss your holiday.

Overnight stay with breakfast in Assisi

This ‘Discover Assisi’ walk will take you around the most important cultural monuments of Assisi, which are mostly connected with the lives of the saints Francis and Clare, who were born and died in Assisi. From the hotel, your walk goes up to the Porta Cappuccini town gate (470m a.s.l.). From here you will walk through a tangle of little alleys and medieval squares. You will pass the remains the medieval castle (506m a.s.l.), the basilica of St. Francis, the temple of Minerva, the church ‘Chiesa Nuova’ and the basilica of St. Clare, finally walking down to the monastery of S. Damiano (310m a.s.l.). After your visit of this monastery, you can choose to go back to your hotel or to continue your walk downhill to the village of S.Maria degli Angel (210m a.s.l.) to visit the impressive basilica with the Porziuncola, where Saint Francis lived with his companions for several years. From here the local bus will bring you back to Assisi.
Walking time: 3 – 4 ½ hours
Overnight stay with breakfast in Assisi

Today you can choose between a long and a short route:

The long walk through the hills around Assisi starts from the Porta Cappuccini town gate (470m a.s.l.). From here, you walk along a walking trail to the hamlet of Costa di Trex (570m a.s.l.) and you descend to the village of Ponte Grande, where you can enjoy a well-deserved rest in one in the bar or restaurant. Your route will then bring you back to Assisi through gentle, rolling countryside. You will have splendid views on the surrounding landscape. Assisi you enter passing through the Bosco di San Francesco (woods of Saint Francis) or through the Porta S.Giacomo town gate. You cross the centre to return to your hotel.
Overnight stay with breakfast in Assisi

The shorter walk through the nature park of Mount Subasio :
This is a beautiful walk in the shade of the woods of Mount Subasio. From the Porta Cappuccini town gates, you walk up to the hermitage Eremo delle Carceri (830m a.s.l.), a holy place where St Francis retreated himself. Then you descend along trails and quiet country roads to return back to Assisi.
Total ascent / descent: + 544m -544m
Distance: 12 km / 7,5 miles
Walking time: 4 ore

There are two routes to go to Spello: a longer one going uphill to the hermitage Eremo delle Carceri or a shorter one through olive groves along the slopes of Monte Subasio.

The long route has more up-and downhill walking- From the Porta Cappuccini a footpath will take you to the hermitage, which is situated at 830m a.s.l. Saint Francis and his companions used to retreat here to meditate in the woods. After St. Francis’s death, a monastery was built on this spot, but you can still visit the cave of Saint Francis. Passing the spring ‘Tre Fontane’ and the abbey of S. Benedetto you will descend to Spello. You walk first through woods and then through olive groves.
Overnight stay with breakfast in Spoleto
Walking time: 6 hours
Distance: 17, 4 km / 10,8 miles
Ascent / Descent: + 788m -870m

The lower route follows the slopes of Mount Subasio and involves less climbing, but it is a beautiful walk through olive groves with astounding views over the valley.
Spello is built on the slopes of Mount Subasio. This little town has Roman origins, as several features including the Porta Venere and Porta Consolare town gates and the remains of a Roman theatre outside the town walls remind us. Do not forget to admire the colourful frescoes by Pinturicchio in the church of S.Maria Maggiore.
Total ascent-descent:+ 270m – 359m
Walking time: 3 hours
Distance: 10,8 km / 6,7 miles

At the end of the day, you take the train to Spello, or those who booked a transfer will be brought to Spoleto by car. You stay in an *** or **** hotel.

Today’s walk takes you to Monteluco (Mount Luco). The name ‘Lucu’ (lucus) means ‘sacred woods’, and signifies that in ancient times the mountain was considered a holy place. From the 5th century, hermits lived under the Benedictine rule on this mountain covered with green woods. Later the Franciscans also built a monastery here. The evergreen oak wood was always very important for the town and was therefore already a protected area in the middle ages. The animals living here include porcupines, wild cats, foxes, badgers, and squirrels.

Today after breakfast at 9.00 you have a transfer to Poreta and from here you walk along the Olive Trail –’sentiero degli olivi’. As the name indicates, you will mostly walk through olive groves on the slopes of the mountains. It is also a stretch of the Way of Saint Francis, a pilgrimage walking route from La Verna in Tuscany to Rome. You pass several little villages, mostly built on hilltops, like Eggi and Bazzano. It is also possible to shorten the route and have the transfer to Bazzano superior, which makes the route about 3kms shorter.

Day 7 | End of tour after breakfast