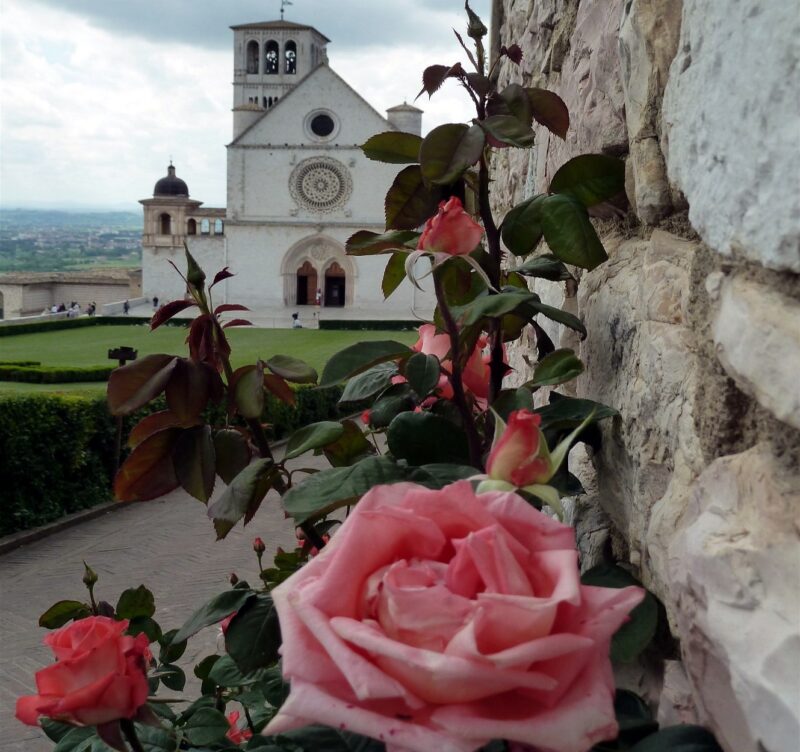 Assisi is a lovely medieval town in Umbria, the green heart of Italy. This picturesque pilgrimage destination is part of UNESCO world heritage since 2000. The town is beautifully situated on a fertile hill brightened up by olive groves and cypress trees. It is the birthplace of two of Catholicism’s most venerated saints, who have influenced both the history of the town and humanity itself: St Francis (1182) and St.Clare (1193). Take your time to wander through its alleys and to relax on cozy terraces on small squares to drink a cappuccino, a refreshing beer or a good glass of Assisi Doc wine. There are many monuments worth visiting and who is interested in history and art, this is a must-see on your destination list. 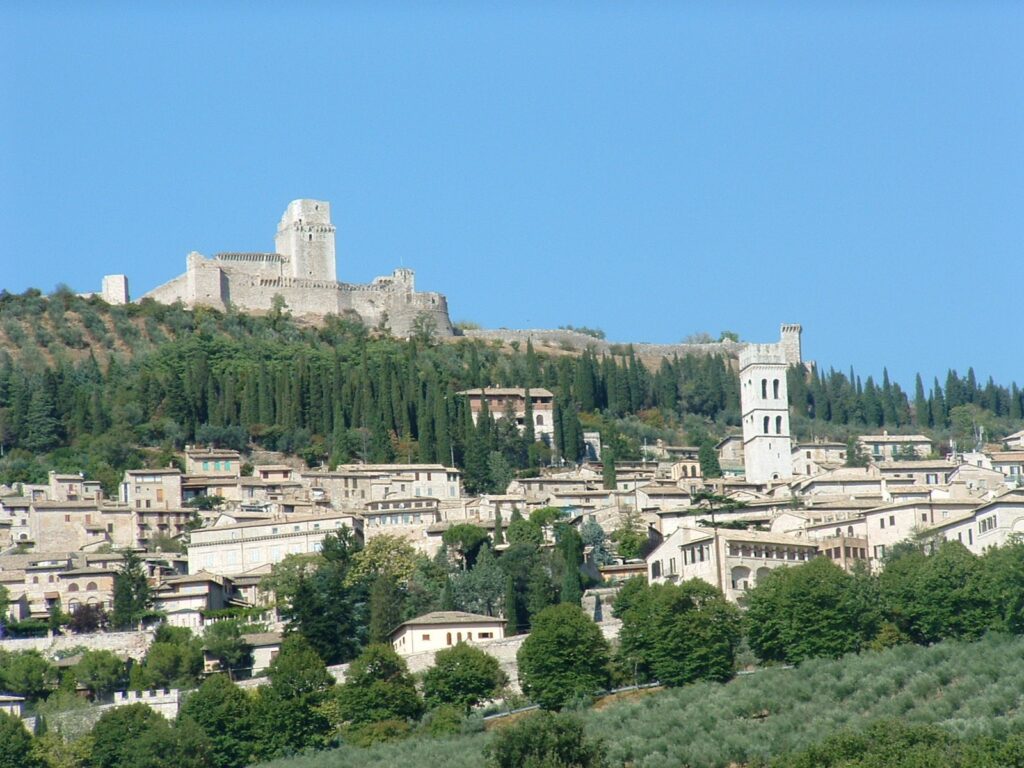 In the foreground of Assisi stands the robust medieval Basilica of St. Francis, the jewel in Assisi’s crown. The immense structure consists of two churches placed on top of the other: the Lower Church (1228-1230) and the Upper Church(1230-1253). Both churches contain frescoes from famous Italian painters, like Giotto, Simone Martini, Cimabue, and Pietro Lorenzetti. In the Upper Church, the walls are covered by a magnificent cycle of twenty-eight frescoes painted by Giotto. These depict ‘Scenes from the life of St. Francis’. 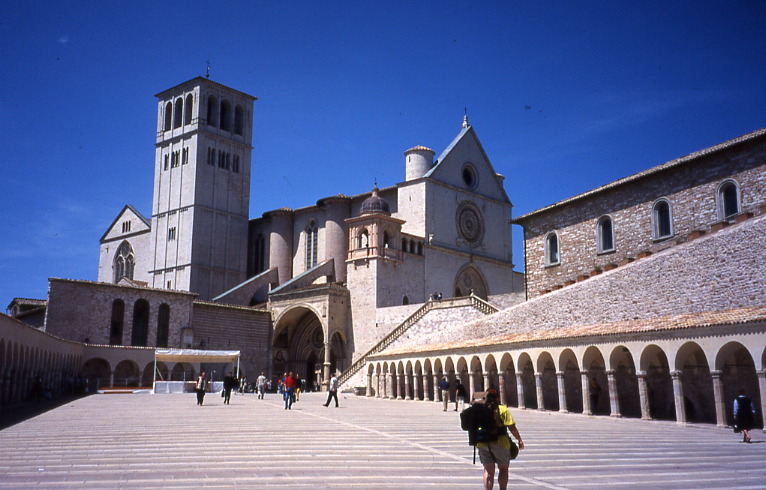 The piazza del Comune is situated at the heart of the town and is built on the site of the ancient Roman forum. Ancient medieval buildings surround it and a fountain stands in the middle of the square. Buildings in the piazza include the Priors’ Palace (13th – 14th century) and the Temple of Minerva, which was reconverted into the church of S.Maria sopra Minerva. This construction is a good example of a temple of the Augustan period (1st century BC). Six fluted columns with Corinthian capitals form the beautiful pronaos.

The basilica of St Clare is built in the second half of the 13th century. Three large flying buttresses characterize the construction. The interior is simple and bare. A flight of steps leads down to the Crypt, which contains the mortal remains of St. Clare. The chapel of the Crucifix contains the famous Byzantine crucifix (12th century), which, according to the tradition, is supposed to have spoken to St Francis in the church of St Damian.

The massive Rocca Maggiore crowns Assisi. Its location above the town is a natural defensive position. This place is one of the best spots of Assisi where you can enjoy a breath-taking view of the town and of the Umbrian countryside area. During Roman times the walls of the city were extended and the Asio hill was included within their perimeter. The earliest records of the current castle date back to the year 1174. In 1365 Cardinal Albornoz, ordered to rebuild the Rocca, and later many considerable works were done to enlarge the castle. When in the 16th century it was no longer used for military purposes, the Rocca became a prison and after 1860 property of the state. The castle has been restored recently and today tourists can visit its impressive and elegant rooms. 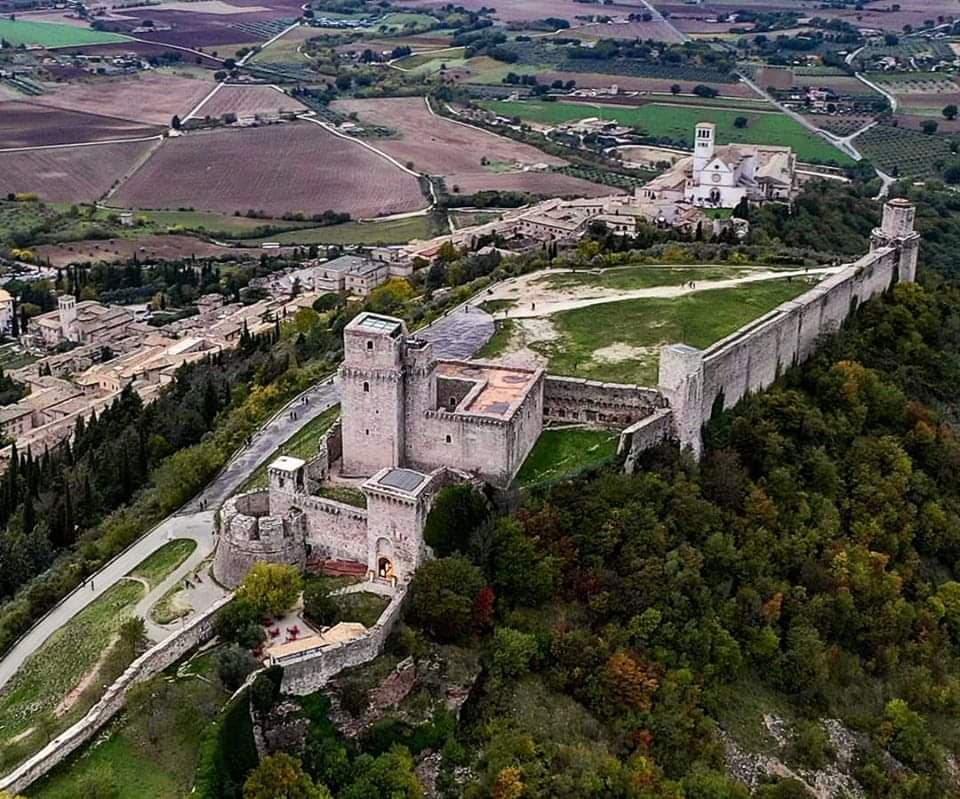 Many of our tours start in the picturesque town of Assisi. For example, our Medieval walking tour has a 9-day version with a funny town walk included