The green heart of Italy

Umbria is surrounded by the regions Tuscany, Lazio and the Marches. It is a little jewel with a variety of landscapes ranging from the Apennine Mountains to large valleys and lowlands. Hills are covered with forests, fields, olive groves and vineyards. Water and land flow together…water rises in mountain springs and lakes, runs in rivers creating impressive gorges, waterfalls and of course do not forget Lake Trasimeno, the fourth lake of Italy. Umbria offers just the right combination to enjoy a beautiful holiday visiting beautiful small medieval towns, emerge yourself in the stunning landscapes & sample delicious local products.

The region’s name come from the Umbri tribe, one of the oldest in Italy. Umbri, together with the Etruscans, were later absorbed into the Roman Empire. There are many important ruins and remains of glorious times in Umbria: Roman houses, villas, forums, theatres and amphitheaters that can still be seen and visited.  After the collapse of the Roman Empire, Lombard’s founded the duchy of Spoleto, covering much of today’s Umbria. When Charlemagne conquered most of the Lombard kingdoms, some Umbrian territories were given to the Pope, who established temporal power over them. Some cities acquired a form of autonomy (the comuni). These cities were frequently at war with each other, often in a context of more general conflicts, either between the Papacy and the Holy Roman Empire or between the Guelphs and the Ghibellines. The most important period in the history of Umbria are the Middle Ages, with worldwide known Saints like Saint Francis and Chiara of Assisi. Nowadays, most of the festivals and re-enactments in Umbria focus on the Middle Ages, with their customs and traditions.   After the French Revolution, the French conquered Italy, later Umbria became part of the Napoleonic Empire (1809–1814). After Napoleon’s defeat, the Pope regained Umbria and ruled it until 1860. Following the Risorgimento and Italian unification, in 1861, Umbria was incorporated into the Kingdom of Italy. In 1946 Umbria became part of the Italian Republic.

Historically, culturally and religiously, St. Francis and the Franciscan order were very important to Umbria. Who was this so beloved and worldwide famous saint ?
‘He was the Son of Mona Pica and Pietro di Bernardone and was born in 1181 or 1182. The first biographer –Tommaso da Celano- described Francis as the courteous and generous son of a prosperous merchant family. He fought as a knight in the Battle of Collestrada in 1202 and was taken prisoner. Upon his release he returned to Assisi. During a journey, Francis became seriously ill and after meditating and receiving miraculous visions that revealed his true vocation to him, he returned to Assisi…he dedicated himself to works of charity…Francis’ encounter with the leper and the miracle of the Crucifix of San Damiano that spoke to him, saying, ‘Go and repair my house’, convinced Francis that he wanted to live in poverty to serve the Lord.
Between 1211 and 1212, Chiara di Favarone d’Offreduccio followed Francis’ example, leaving her home against family wishes. She fled to the Porziuncola, where St. Francis cut her hair to confirm her choice of a life of poverty and penitence. Clare and her early followers established their residence at the church of San Damiano. In a short time, Francis’ followers became very numerous.

Two years before his death, while he was praying on mount La Verna, Francis received the most meaningful signs of his sanctity when his body was marked with the Stigmata… Francis died in 1226, surrounded by his brothers. The citizens of Assisi triumphantly carried his body to the crypt of the Church of S.Giorgio, which is now the chapel of the Sacrament in the church of S.Chiara. His body is now in the Basilica of St. Francis. 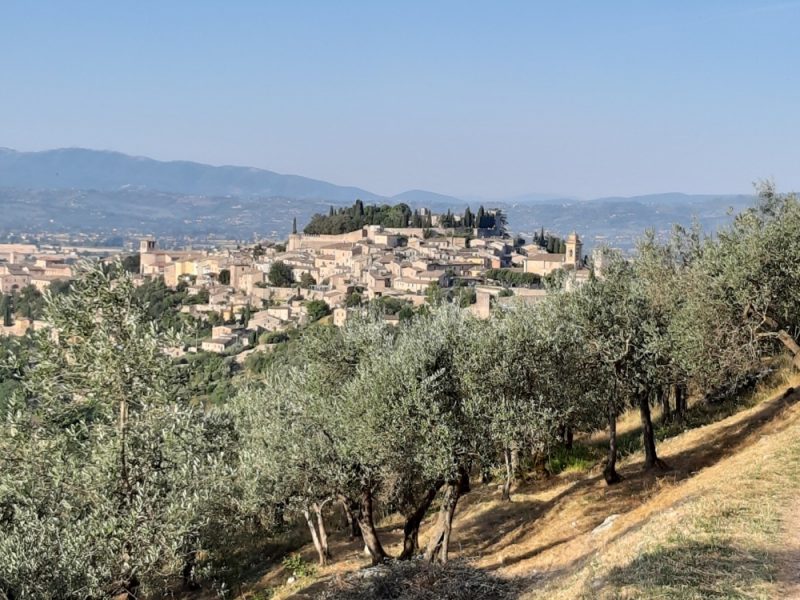 Umbria has a Mediterranean climate, with dry and warm summers and mild winters. However, there is a variety of climate’s environments: cold on the Apennines and mild in the area surrounding Lake Trasimeno, all year round. Air is generally clean and dry. The average maximum temperature is 26 degrees C and average minimum is 12 degrees C.

Umbria produces Italian wines of excellent quality thanks to its wonderful climate, rich soil and local expertise. Among the best Italian red wines you find the Rosso of Torgiano, the Rosso of Montefalco and the Rosso of the Colli Amerini. We should also mention the Sagrantino of Montefalco which is known worldwide and the white wine Orvieto Classico. Then although less famous, but not less tasty we have the typical Umbrian white wine Grechetto, which is produced in different area’s of Umbria. It is a strong wine, which can be combined for example with the good local cheeses, salamis and truffle dishes.

The Umbrian hills, especially in the area of Assisi, Trevi, Campello and Spoleto, are excellent for the cultivation of olive oil. The oil coming from this soil has a rich and strong characteristic taste. The colour is deeply green. The oil is certified by the denominations D.O.P. D.O.C. D.O.C.G. and this is a testament to its excellent quality. You can’t leave Umbria without tasting a warm, crispy bruschetta with a drizzle of extra virgin olive oil !

Truffle is considered the ‘black diamond of gastronomy’ and is largely produced in Umbria due to the rich quality of the land. Umbrian truffle is an excellent dressing for any plate and an elite dressing in any cooking. The wealth and the variety of woods and lands in the region make it possible to pick tuber crops with particular organoleptic characteristics. This is certainly the case of the black truffle of Norcia and of the white one of the Orvieto area. Of course in many Umbrian restaurants you can taste the truffle on bruschetta, pasta, risotto or meet dishes.

But of course wine, olive oil and truffle are not the only delicacies in Umbria.  There are excellent Pecorino (sheep’s milk) and Caciotta cheeses from sweet and creamy to cave-aged and spicy. Norcia is famous for its raw hams, salamis and dry sausages and in all Italy you can sample hand cut or sliced prosciutto di Norcia. As a street food stop you can pickup a porchetta sandwich. Porchetta is a herb-packed boneless pork roast flavored with wild fennel that only grows in Umbria. 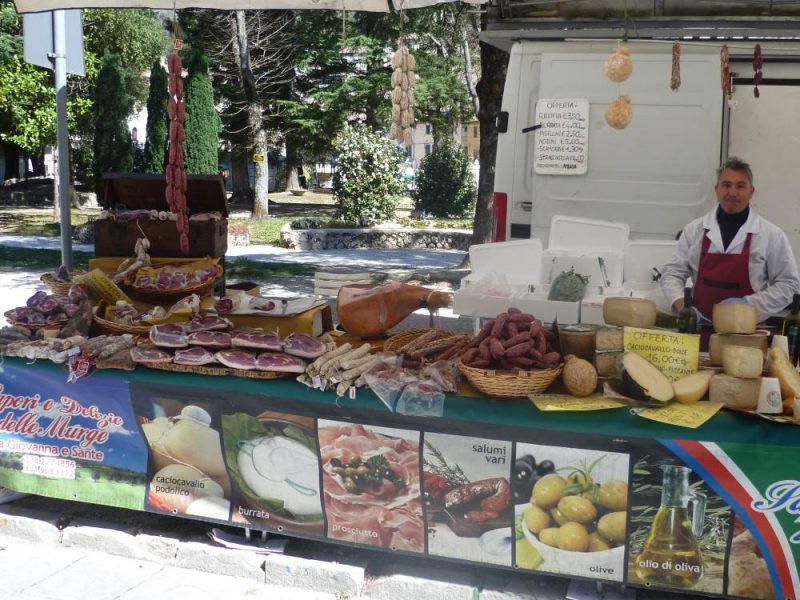 Assisi, Spello, Bevagna, Montefalco, Trevi, Spoleto, Gubbio, Todi and Orvieto are some of the highlights of Umbria. They are well-preserved medieval towns, some more little and some bigger, most of them also with an interesting Roman past.

Let’s start from the captivating Assisi, the town of Saint Francis and Clare. Its pearl is certainly the stunning Basilica of Saint Francis, but there are also many other important monuments, churches and museums to visit, such as, monastery of San Damiano, church of saint Clare, the medieval fortress Rocca Maggiore, along with beautifully preserved Roman remains, the Roman Forum and two Roman houses. Descend from the old city center to Santa Maria degli Angeli to visit the Porziuncola under the dome of the Franciscan basilica.

From Assisi you could make a lovely walk through the Mount Subasio park to Spello, a quiet little town with a tangle of small streets colorfully decorated with flower pots, which gave it is name town of flowers. Once a year, during Corpus Domini, people from all over Italy come to admire the flower mosaics made by the inhabitants. Also Spello has Roman origins (evidence are the Porta Venere and Porta Consolare town gates, the remains of a Roman amphitheater and the stunning Villa of Mosaics just outside the town walls).

Bevagna is also worth a visit: unlike most Umbrian towns, it is not built on a hilltop, but in the valley, at the confluence of the rivers Topino and Timia. During Roman times, Bevagna was a prosperous town, because it was situated along the busy trade road, the Via Flaminia, which connected Rome with the Adriatic coast. On the main square are two Romanesque churches and very interesting to visit is also the medieval house.

From Bevagna you enter the famous wine area of the Sagrantino and Rosso di Montefalco wines. Here, in Montefalco, tasting wines on one of the many terraces and wine bars is a must! Nice to visit is the Saint Francis church, now a museum with fresco’s of Benozzo Gozzoli and Perugino.

Let’s mention now the capital town of Olive Oil. Trevi, a hilltop town, which you will see from afar, is surrounded by silver-green olive groves. The extra virgin olive oil is particularly good here: it has a beautiful green color and it is very tasty, especially on a warm toasted bruschetta. There are nice churches to visit and often a fleamarket with antiques and local products is organized.

The charming town of Spoleto shows evident traces of the Roman era even in its urban structure, Spoleto has a medieval appearance, due to the period in which it was first a flourishing Longobard Duchy, and then an important city within the Papal State. It is worldwide known for its Festival of the Two Worlds, held every year at the end of June-beginning of July. There is a lot to see like the impressive castle, the cathedral with the fresco’s of the Florentine painter Filippo Lippi and the Umbrian painter Pinturicchio, but also there are nice museums to visit.

Gubbio is one of the most fascinating Umbrian cities, also called the City of Fools. Don’t forget to visit the St. Ubaldo’s House, the ancient tower house where the Gubbio’s patron saint used to live and the many museums. Gubbio is famous for its Race with takes place every year on May 15th, the so called Corsa dei Ceri.

The county town Perugia is built on a hilltop, like many Umbrian towns. It is a vivacious town with a lot of museums, like the galleria Nazionale dell’Umbria, churches, intimate bars, cozy restaurants where good local food is served and many adorable shops ! In July there is to enjoy the famous Jazzfestival.

Finally, let’s move to the Southwest of Umbria and visit first Todi and then Orvieto, situated on the flat summit of a large rock of volcanic tuff. The heart of Todi is the square Piazza del Popolo, which is overlooked by some of the most important buildings of the old town center. Here we find the Palazzo del Popolo, the Cathedral, Palazzo del Capitano and Palazzo dei Priori. Orvieto rises dramatically above the almost-vertical faces of tuff cliffs that are completed by defensive walls built of the same stone called Tufa. Its Duomo (Cathedral) is one of the most beautiful in Italy, with impressive frescoes by Luca Signorelli and Gentile da Fabriano. Also Orvieto undergrounds is excited to visit, like the deep water put Pozzo di San Patrizio!

Discover Umbria together with Meravigliosa Umbria

Discover the beauty of Umbria, the Green Heart of Italy! Enjoy the intensely coloured Umbrian landscapes, the fascinating culture, the suggestive medieval towns and villages, the hospitable inhabitants, the tasty local cuisine and the delicious wines! Since 2000 we organize hiking trips, cycling holidays, day bike tours, trekking along the pilgrimage route the ‘Way of Saint Francis’, wine-tastings, truffle hunting, cooking lessons in the beautiful region of Umbria!

Or just rent a bike (hybrid, e-bike or road bike) and make a nice ride through the Umbrian countryside!