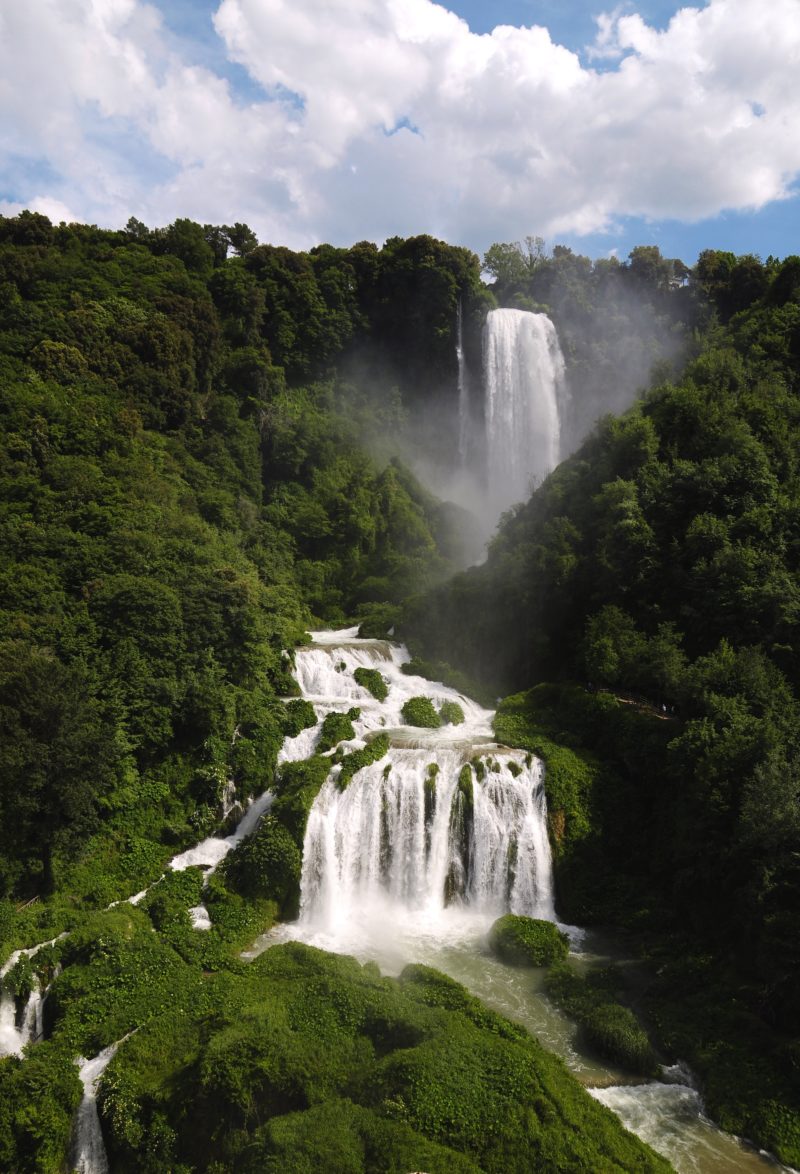 Did you know that in Umbria, in the province of Terni, you can admire the highest falls in Europe? The Marmore Falls are the embodiment of ingenuity, passion, and strength.  They have been visited by many famous people during the thousands of years of their existence. We only name Cicerone, many Popes, Galileo Galilei, William Turner, Lord Byron, and numerous painters and poets.  The waterfall is located in the municipality of Terni. The waterfall is formed by the river Velino, which flows into the river Nera from the nearby lake of Piediluco. It has a height of 165m, divided into 3 jumps that give them a simply spectacular appearance, and therefore it attracts almost 400.000 visitors every year. The waterfall is used to produce Hydroelectric energy and it doesn’t have always the maximum flow, but usually only 30%.

Not everyone knows that it is not a natural waterfall, but it dates back to Roman times when the consul Manio Curio Dentato ordered the construction of a canal. This canal allowed the stagnant waters of the Velino river, which due to the soil structure created a harmful and swampy area, to flow towards the Marmore cliff and then fall into the Nera river.  During the years many other interventions were made to prevent the risks of the flooding of the two rivers; in 1422 a new canal was built and in 1547 Antonio da Sangallo the Younger built another one. In 1787 Andrea Vici intervened directly on the leaps, giving it today’s appearance, and he managed to solve most of the problems.

Leggenda of the waterfall:

The Marmore waterfall, under the protection of S. Valentino (patron of Terni), is from the beginning of its existence, a symbol of love and passion, because of the balcony of lovers and the various legends that surround it. The best known is the one about its creation; it is told that the nymph Nera fell in love with the young shepherd Velino. However, this profane love was not allowed and Juno learned about it, he decided to turn Nera into a river! As Nera was pouring out her tears impetuously, Velino asked a sibyl where Nera had gone. After he discovered her fate, he threw himself from the cliff to be reunited with his beloved. In this way the waterfall was born, a symbol of infinite love.

The balcony of lovers is located alongside path n° 1 and once you have passed through the tunnel of lovers, you can be a witness of a unique splendor… but better bring a raincoat!
A good observation tower is the Specola loggia, from where you can admire the first jump and with a little bit of luck you manage to see the Rainbow of Marmore.
The name Marmore derives from the characteristic salts of calcium carbonate that settle on the rocks of the mountain, whose reflection of sunlight makes them similar to white marble crystals. Marmore is also the name of a nearby medieval village, one of the most beautiful villages of Valnerina, together with Piediluco and Arrone.

For more information about visiting hours: official website of the Marmore Falls or for general information

A particular way to admire the waterfall is on foot, walking along the pilgrimages route Way of Saint Francis (Via of San Francesco). Every year many pilgrims and walkers travel along this mystical pilgrimage route through Umbria. The stage from Ferentillo to Piediluco passes right by the waterfall. 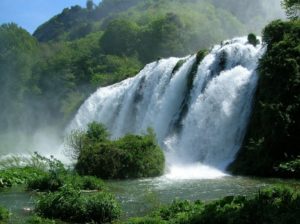